None of us will quickly forget what it felt like as churches closed, the economy shut down, and entire countries went into self-quarantine amidst the initial outbreak of the coronavirus. Such drastic measures had never been seen before in human history, especially on such a large scale. Only a combination of relatively recent medical discoveries (like germ theory in the 19th century) and technological advances (like air travel in the 20th century and smartphones in the 21st) made such a response even possible. We stood by as countless debates ensued about the virus’ effect on national health systems, local economies, and global politics. We wondered how close the virus would hit home as we avoided vulnerable loved ones and prayed for those who were dying alone in hospitals. We hoped beyond hope for a speedy vaccine, purchased masks in the meantime, and watched as social distancing become the hallmark of compassionate civic engagement.

But rare was the thoughtful debate about the virus’s implications on faith and culture. It certainly affected our personal prayer lives as we live-streamed church on Sundays. It affected our sense of community as we set up family trivia nights, Bible studies, and even happy hours behind screens. But what did it mean for human history that churches were closed on Easter Sunday for the first time in 1700 years? What did it mean for the human culture that families were forced into isolation, religious institutions were deemed unessential, and online industries like pornography and social media were given full reign to breed one addict after another?

As of late, I’ve asked myself what it means to be American more than in any other period of my life. I love this country and especially my hometown of Nashville, but I’m more skeptical than ever of medical experts, elected politicians, and Hollywood elites. How can there be so much disagreement and discord? What principles even unite us as a country? Who can be trusted to lead us through the next crisis when self-contradiction and egomania rule the day?

And yet, a far more important question has been surfacing in my heart as well: What does it mean to be human? What unites us across the human experience and makes life worth living? When everything is on the line, even when time seems to stop and the whole world sinks into anxiety, what does it mean to be fully human and fully alive? And what role does the Church play in offering the world a way of life that builds a better culture and transforms people from the inside out?

The problem is that we’re living in a time that rarely asks big questions. It took a pandemic for many people to slow down long enough to ask where their lives were going, what their lives were about, and how they could make a difference in the world.

The greater problem is that we’ve all grown up in a culture of relativism that rarely moves beyond saying, “You have your truth, and I have mine.” We’ve all heard these words spoken by family and friends. They deny objective truth and end all debates before they can even begin. They’ve invaded higher education and mainstream media. They’ve replaced moral norms with political correctness. They’ve fostered fierce individualism and left an entire generation existentially orphaned.

This culture of relativism has given way to a culture of noise that fills our everyday lives with endless distractions. On average, we check our phones once every twelve minutes. We scroll our screens long enough to cover the distance to the top of Mount Everest and back every year. We passively contribute to the half a billion tweets that go out every day across the world and the billion hours of video consumed on YouTube. Don’t get me wrong. These platforms are morally neutral, and they can be used for great evil or great good. But the noise they cause is pervasive, leaving our culture of relativism largely unquestioned. Meanwhile, our hearts are filled with quiet desperation. We’ve grown numb to our infinite desire for God. And our culture is sinking into despair.

Throughout most of college, I tried to win people over to my faith by living a morally upright life and winning theological debates whenever possible. I pinned up friends in the corners of coffee shops, doing whatever it took to convince them that I was right, and they were wrong. I often tried to convince them with charm and persuasion, but I quickly turned them into intellectual projects and hijacked their humanity (and mine) along the way.

After several years as a frustrated evangelist, I began praying and fasting. I studied history and philosophy. I looked to the lives of great saints and reformers to see how they won souls and spearheaded entire movements of renewal in the life of the Church. Over the course of several months, I noticed a consistent thread: great evangelists never took their eyes off of beauty. They fixed their gaze constantly upon the Beautiful One, who gave them their identity every day in prayer. They constantly surrendered to God’s loving providence and allowed Him to orchestrate a beautiful masterpiece with their lives. Their relationship with the Lord wasn’t a transaction. It was a romance. They saw Him in the beauty of Creation as effortlessly as they revealed Him in the beauty of their lives. They deeply believed that personal renewal was the only way to cultural renewal.

Why, then, does beauty matter so deeply in our times?

Great philosophers and theologians have always described the transcendentals of beauty, truth, and goodness as overarching realities that point to the meaning of human existence and ultimately to God. In today’s world, relativism has overshadowed the pursuit of truth and goodness, convincing us that it’s intolerant to propose anything absolute. This fear of objectivity and its demands eliminates the possibility of intellectual discourse (truth) and moral standards (goodness). To disagree with the high priests of mainstream media and higher education is a hate crime. To engage with traditional morality is backward and bigoted.

And yet there is no enemy of beauty. In an era marked by rampant relativism and noise, beauty is the last-standing transcendental. Nobody argues with the beauty of a blood orange sunset, a towering mountain range, a newborn child, or an ancient church. Nobody argues with the humble witness of Mother Teresa or the joyful wit of G.K. Chesterton. Without being able to put it into words, everyone is open to the encounter with God through beauty. When we let beauty speak, it breaks through the noise and brings truth and goodness along with it.

So what can beauty teach us about living intentionally and changing the world? How does it reveal what is good and worthy of our love? How can it help the Church evangelize the world yet again? While beauty speaks poignantly through good music, books, and art, it speaks most powerfully through the lives of everyday Christians who know their dignity, live with heroic virtue, and remind the world what it means to be human. You don’t have to be a philosopher or theologian to live beautifully. You just have to be courageous enough to hunger for more than what this world has to offer.

In a world paralyzed by a pandemic and deeply confused about what it means to be human, it’s time for great saints to rise up from the ashes. It’s time to bring the beauty of God’s love to the forefront of your life and intentionally cultivate the art of being human. When you do so, you not only break through the noise. You become a remedy for the isolation, confusion, and meaninglessness of our times. 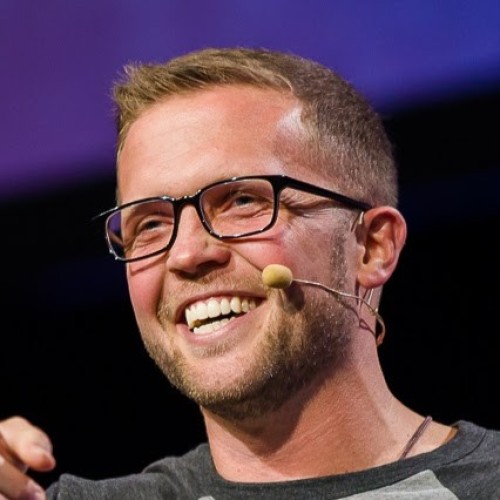 Jimmy Mitchell
Believing deeply in the power of beauty to change the world, Jimmy’s gifts of storytelling and piano-playing bring him to every corner of the world. From summer camps and corporate retreats to large-scale conferences, his greatest joy is helping others fall in love with God. He’s the host of Love Good’s popular weekly podcast, composer of film scores for countless movies that don’t exist, and a huge fan of old books. Whether he’s on stage at a youth conference in New Zealand or interviewing a GRAMMY award-winning artist in his studio, Jimmy loves nothing more than encountering the beauty of God’s love in the hearts of young people and artists.

The Gift of Natural Family Planning, in Real Life

The Catholic’s Guide to Studying the Bible