Life as a FOCUS Missionary in Ireland

“Um, I guess I’m open. What’s my time frame?” I asked. The voice on the other end of the line was quick to respond before hanging up, “Pray about it and I’ll call you in the morning.”

When I got off the call, I remember sitting with the magnitude of the question that had just been asked. Would you go to Ireland as a missionary? It was July 2017; they expected me there in a month.

The invitation was grand: beyond my borders and into the unknown. Would the mission be different? I didn’t know it then, but I would come to see that, despite the new culture, my mission would remain the same. I must be conformed to the heart of God, I must abandon my will to the Lord, and I must be a witness and proclaimer of the Gospel!

I cried a lot that day thinking about what I could possibly be leaving — family, friends, country. All the while, the words from John’s Gospel burned in my heart.

“For God so loved the world that he gave his one and only begotten son, so that whoever believes in Him may have eternal life.”

I thought to myself: If God gave His only son, what would be my response? What is worth the risk? What is worth giving my entire life to? What would I give for the salvation of one soul? What would my life be worth if I resisted our God and did not go on mission? What souls would be left in hell?

I arrived in Dublin a month later. Not long after I arrived, I realized that it takes a long time to win over an Irish person to friendship. I have an American friend in Ireland who once told me, “If you came to Ireland for six weeks, you would leave with so many friends, but if you moved to Ireland after 6 months you would realize that you don’t have any friends.” The Irish are so friendly and hospitable. The Irish are also typically more private and more cynical than those of us who come from south-central Texas! Students on campus were not too open to having spiritual conversations and truly befriending a foreigner like myself so quickly.

As a missionary in Louisiana and Colorado, I was used to spiritual conversations happening relatively easily in new friendships, but the Irish often hid behind talking about the structures of the Catholic Church and religion and would avoid a real conversation about God. I was also used to working with American college students who had moved across country and changed their lives drastically. However, the Irish are more rooted and attached to their families, friends, and where they come from. I found this to be a great cultural norm, but it made conversion especially difficult when students’ old lifestyle choices and friends were tugging on them as they frequently traveled back home.

And although my surroundings were completely different, and the culture was new and daunting, I recognized some undeniable similarities in my work as a missionary. Sure, the first year was lonely. And I had few Irish friends. (As any new missionary would understand.) But I found myself often reminding my missionary teammates to endure and show up one day at a time, and to continue believing in the “little way of evangelization”. This was how I had been trained as a missionary, and there was nothing else to do. “If we love people in small ways every day, in time, hearts will be changed.” I said this often, but I don’t think I believed it. I questioned if I was too different as an outsider, or if conversions could even happen in Dublin the way I had seen them happen in Texas, Louisiana, and Colorado.

Slowly, people started to come to Bible studies after a semester on campus. Year two we saw way more interaction with students and the Catholic society on campus. Our continued presence mattered. The students wondered if we would come back, and we did! This was also transformative for the students who had started to amend their lives and were striving to be disciples of the Lord. They were now reaching out to others as well. Spiritual multiplication was slowly happening the same way I had seen it happen everywhere I had been in the U.S.

After a couple of years in Dublin the reality of what it means to be missionary hit me deeper than ever before. I realized that regardless of the place, the same love, consistency, zeal, and generosity were demanded of me. In a new way, I understood the missionary mandate that God gave to me in Texas, Louisiana, Colorado, and now, Ireland.  “Go therefore make disciples of all nations…” I even realized that it was, in fact, leaving home that allowed me to receive the Good News of the Gospel myself.

Love demands a response. What matters in this life is that we heed the call of the Lord. When he beckons, we must go, for He is “the way, the truth and the life.” For me, this call has meant Ireland these past five years. For most people, God’s invitation may be to stay in their jobs and neighborhoods and churches and to love and evangelize in those places. But, most definitely, he is still making a specific invitation! God does not lay out a default way for you to give him your life. His invitation is specific! You must ask Him what he wants of your life. Let us come to the Lord today, like Samuel of the Old Testament, and say, “Speak Lord, your servant is listening” (1 Sam 3:10). 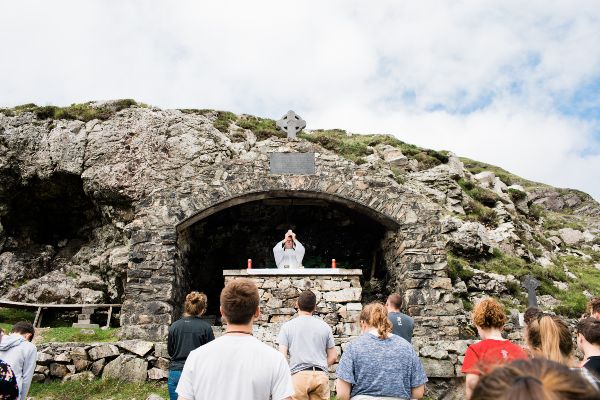 The fruits of the mission are abundant, truly. There have been many conversions, including my own. A turning point occurred when, somehow, we convinced 28 students to come with us to SEEK2019 in Indianapolis. We traveled three days early and spent the time in prayer and fellowship—this was when we first established something worthy of being called a community. 27 of those students had special experiences of encounter with our Lord at the conference. One remained obstinate—we’ll call him James. He came as a skeptic of the Church and faith in general. He left the same way. The community continued to love him as they returned to campus, but he wanted nothing to do with them. His bible study leader, a fellow student, continued to invite him, though he wouldn’t come. And now, four years later, James lives in a house with a group of Catholic men and prays every day. He loves the Church and can’t imagine another way. James, like any student in Texas or anywhere else, was still in search of something more.

From that group, I’ve witnessed six men and women join seminaries and religious life. Five from that trip became missionaries with FOCUS, three married couples and two more coming this year. That was just from that one group! The fruit is even more bountiful than what is named here, but blog posts are supposed to be short, so I leave it there! In Evangelii Nuntiandi, Pope Paul VI writes,

“The world which, paradoxically, despite innumerable signs of the denial of God, is nevertheless searching for Him in unexpected ways and painfully experiencing the need of Him—the world is calling for evangelizers to speak to it of a God whom the evangelists themselves should know and be familiar with as if they could see the invisible. The world calls for and expects from us simplicity of life, the spirit of prayer, charity towards all, especially towards the lowly and the poor, obedience and humility, detachment and self-sacrifice. Without this mark of holiness, our word will have difficulty in touching the heart of modern man. It risks being vain and sterile.”

We’ve experienced amazing graces in Ireland; however, in some ways they matter little because there’s always more to do! Here, now for my 6th year in Ireland, I am asking myself the same questions I was asking during my first year: Am I faithful to the Lord? Am I allowing Him to transform me to be more like Himself everyday? Am I willing to love at all costs? Do I understand that to love is to share the Gospel with words and actions? No matter the state, continent, or country, these are the questions that matter. Sean Flack
Sean Flack is serving his 9th year as a missionary with FOCUS. Originally from the great state of Texas, he now lives in Dublin, Ireland since moving there in August 2017.